Verbs change for so many reasons. Every Spanish learner needs to have a solid understanding about how Spanish verbs work. I will introduce you to the basics. And then show you all the verb parts and how to conjugate them. This essential skill will help you understand and use verbs effectively in conversations and reading.

A verb is one of the eight parts of speech. Every word fits into one of the following grammar categories. Next to the English, I give the Spanish name for each part of speech too:

Of all the parts of speech, the verb is the only one that

can make a complete sentence all by itself. That’s right, in Spanish, a one word sentence is possible. Because the verb contains many pieces of information, including subject references.

Today, we will explore the mysterious world of form changing verbs.

What’s a verb anyways? A verb is a word that expresses action or a state of being, links two words together or helps another verb. Verbs are the heart of the sentence. They are an action and a romance movie rolled into one. Without them, all you have are inanimate and nondescript subjects.

Verbs tell about the subject of a sentence. The subject has all the power. It contains all the action and being. The verb tells about the subject – the main noun – person, place, activity, or idea. These are the things we think and talk about. Every sentence has at least one subject and one verb.

I love Spanish verbs for their efficiency and predictability. The parts within the verb follow the same patterns. Even the irregular verbs contain the same elements, although they change for sound and spelling differences.

I am going to cover the verb parts in slow motion with lots of juicy, practical details. The focus is on the patterns, the rule followers, the regular verbs. At the same time, the irregular verbs also fit the same patterns. They just need extra special attention for changing sounds and spelling. These are the differences that make them sound uniquely Spanish.

Keep up in your reading and conversations.

Each verb part is jam packed with meaningful details. 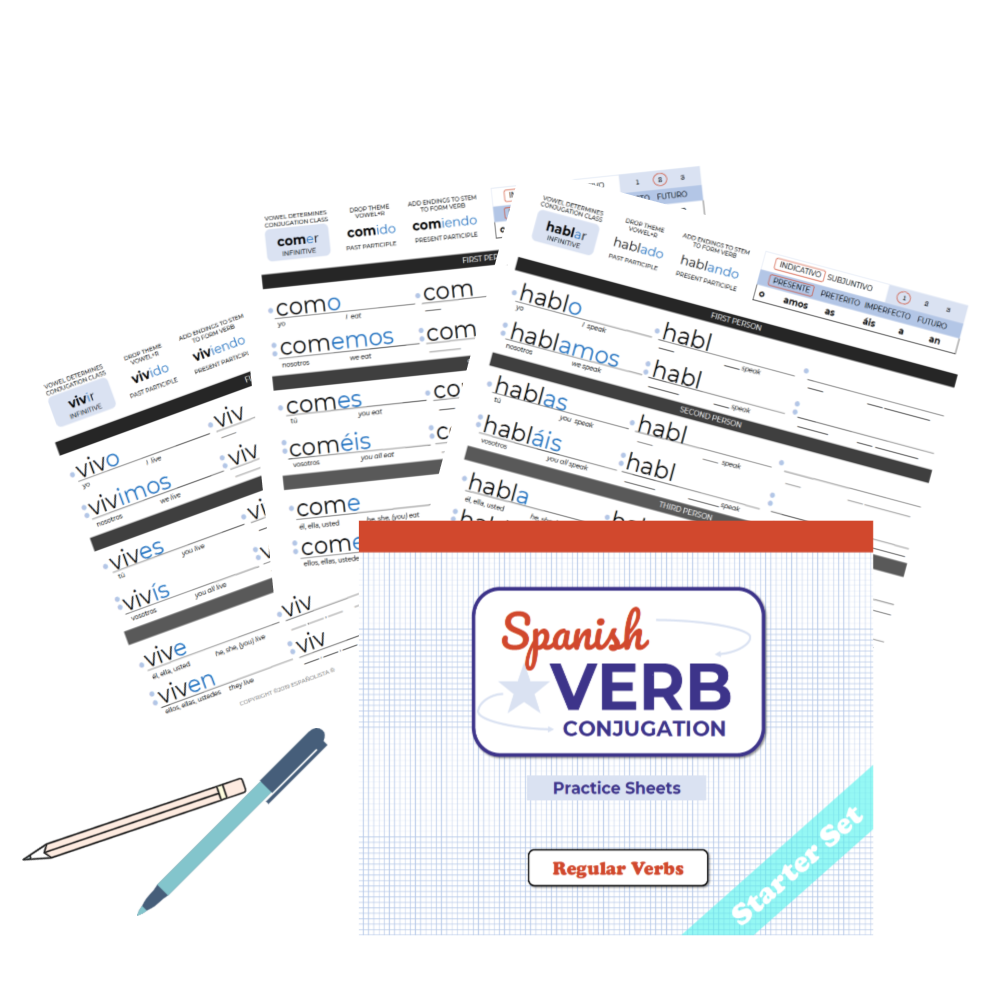 get the full set here

Both regular and irregular verbs have the same internal parts. These parts are jam packed with important details. One letter tells you who or what, how many, when or how often. That’s so hard for beginners, even advanced learners, to take in so much information in one word accurately.

In a conversation, when you get lost in the details, in desperation say, “mas despacio, por favor”. The sooner, the better.

Every verb carries these key parts:

The verb looks like this: Stem + Tense & Mood + Person & Number

Instead of words there are letter patterns for each part.

Start with the Infinitive Form

The starting point for verb conjugation is always the infinitive verb form. The infinitive is easy to identify by the last letter R. That R at the end tells me this verb is time neutral. It is infinitive, a timeless classic indeed.

From the infinitive verb form, we find two pieces of crucial information that determine the word’s meaning and conjugation class. That’s a fancy word for saying pattern.

For fun let’s examine the details of the verb: CHIFLABA

From the infinitive verb form, the stem is always first.

The stem tells us the meaning of the verb. What does CHIFL mean? In this case, it’s a specific action. Oye bien, es el movimento de aire con sonido (it’s the movement of air with sound). The first letters of the verb show the action or state of being of the subject.

Spanish verbs have a reputation for being complex, yet I will prove that untrue.

The vowel theme (the vowel after the stem) tells which conjugation pattern to follow. There are only three patterns:

Back to our word – CHIFLAR. The A tells me to follow the first conjugation patterns.

A couple more examples of stems and theme vowels based on the infinitive (ends in R).

Every verb falls into one of the three conjugation patterns. These patterns determine what to add to the stem to indicate the next two ending pieces.

From this point on, the stem is alone and needs a couple friends to tag along on the end.

Complex and complicated are two words commonly used to describe verb tenses and moods. Yet, the creation (or conjugation) of verbs is actually straight forward. This is how it works:

Back to the original verb, this time with a twist, CHIFLABA.

What part is the tense & mood?

The subject of the sentence matches the person and number ending of the verb. For each tense there are three persons – first, second and third and two numbers – singular and plural. That’s a total of 6 person & number endings for each mood and tense.

These subjects tell the verb what ending to take:

FIRST PERSON – SINGULAR: yo (I)

SECOND PERSON – PLURAL: vosotros (you all)

Each of these subject pronouns has a different verb ending, as you can see in this pattern.

This is one set of verb conjugations. All of the regular verbs in the second conjugation, present tense follow this same pattern. First and third conjugation have a different set of endings for person and number.

In the indicative – fact finding mood – the theme vowel most often comes before the person and number ending. Sometimes that vowel is left out though.

That leaves us with the final ending in CHIFLABA. The A tells us the subject is either first person or third person singular.

Every verb has these three parts – the stem for meaning, the mood & tense and person & number.

Conjugating verbs is a skill that every Spanish learner needs to have. Combining the verb stem with endings, creates a picture of action and descriptive details. So here’s what you can do to improve your recall of verbs in all their forms:

Do memory work – repetition, repetition, repetition. This activity comes in many forms – chanting, singing, writing, sorting, etc… The purpose is to create a complete verb with the stem and endings. By repeating the patterns, it will help you to have instant recall in conversations, reading and writing.

Find interesting verbs in a good read aloud book. Reading is a great way to enjoy verbs in their natural beauty. Books are a source of a wide variety of verbs. Different genres and styles of writing use different kinds of words. Pick one that fits your life. Find some sample verbs to conjugate by changing the ending for a different mood, tense and person. Copy sentences from the reading and underline the verb and label each of its parts. Books are a great source of quality samples.

Conjugate one regular verb, one tense, one mood each day. Focusing on one regular verb per day will expose you to many useful words. If you do this Monday through Friday, 5 times per week, that totals 250 sets of verbs in one year. The more you conjugate the quicker you will understand the meaning.

Practice daily with this set of conjugation sheets

get the full set here

Try out the subjunctive mood. Don’t wait too long to start learning how to use the subjunctive mood. These verbs depend on another verb and are left open. They express uncertainty, doubt, desire, emotions and denial. This is not a complete list, yet they are important for dependent clauses. It’s a somewhat unfamiliar concept to English speakers, so study is necessary to understand the useage. A good starting point is learning the all the tenses in the subjunctive.

Take note of prepositions used after a verb. We do this by habit in English all the time. Hold on… Belong to… Talk about… Blow up… Naturally, the verb and the preposition go together. The same happens in Spanish, except they do not translate directly. Acabar de… Volver a… They pair together very specifically.

Give special attention to irregular verbs. Practice one set of the irregular verbs each day. These are some of the most commonly used and important verbs. A lot of them follow most of the pattern, but have a couple variations in some sets. Again that is 250 sets in one year

Making conjugating verbs a part of your study routine has many benefits. You will be able to listen, speak, read and write brilliantly in Spanish. The more familiar you are with the conjugation patterns – the moods, tenses, person and number, the easier it will be for you to understand others and express your thoughts effectively. A little effort on a regular basis will take your verb usage to the next level.

Subscribe to get the practical tools and tips you need to learn and teach your kids Spanish, signup HERE.

This site uses Akismet to reduce spam. Learn how your comment data is processed.

You will complete one task each day to build your Spanish vocabulary. Discover powerful and effective Spanish vocabulary building strategies  to learn Spanish on your own. This challenge is for beginners to fluent, kids and adults.